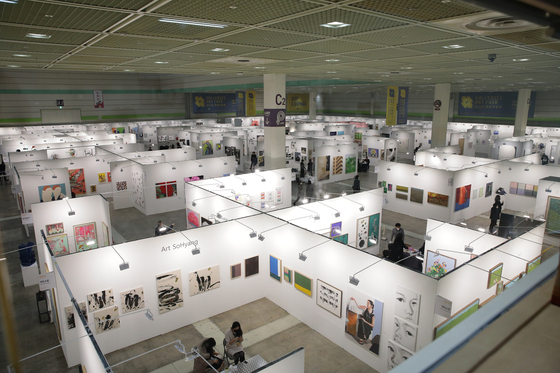 A preview of the 2021 edition of the Galleries Art Fair. The 2022 edition of Korea’s oldest art fair will kick off next Wednesday at the Setec Convention Center in Gangnam, southern Seoul. [THE GALLERIES ASSOCIATION OF KOREA]

The boom in the Korean art market is expected to continue this year, driven by young collectors and new outlets such as online platforms and department stores, despite the various adverse factors impacting the global economy. Local auction houses and galleries are trying to make the most of this boom to broaden the base of art collectors.

Showing signs of the art market’s continued prosperity, Seoul Auction, the country’s largest auction house, sold around 81% of the artworks it offered in its first major sale for 2022 on February 22. Their total value reached 17.3 billion won ($14.06 million). ), up 6.3 billion won on sales from the house’s first major auction for 2021.

“Statue of Venus Obliterated by Infinity Nets” (1998), the multi-dot covered sculpture and painting installation, by Yayoi Kusama, one of the world’s most influential living artists, won the highest bid of 4.4 billion won. The second-highest bid of 860 million won was for an oil painting by Korean modern art master Kim Whanki (1913-74) titled “Plum Blossom, Moon, and White Porcelain” (1950s). 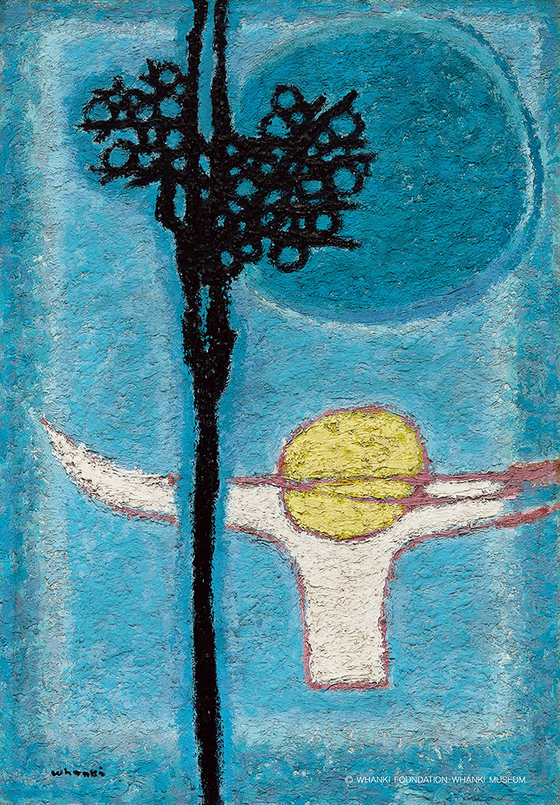 In addition to holding traditional auctions, Seoul Auction is expanding its scope to include collaborations with retail giant Shinsegae Department Store for the sale of artwork at the retailer’s branches. Shinsegae Gangnam in southern Seoul, one of the world’s largest department store branches by sales, has since last year exhibited works by artists ranging from renowned American painter Alex Katz to young Korean artists, some of which are selected and provided by the Auction House. Shinsegae invested 28 billion won to buy a 4.8% stake in Seoul Auction last December.

K Auction, the second largest auction house, also collaborates with a department store. The auction house opened a special six-day art market at Hyundai Seoul in Yeouido, western Seoul, on Tuesday. The exhibition titled “The Collection”, which runs until Sunday, features more than 250 works of art ranging from those of renowned artists such as Kusama, Chung Sang-hwa and Donald Judd to those of emerging artists at fixed prices.

“We have prepared this exhibition because many new collectors have joined the art market and interest in new artists has increased since last year,” K Auction said in a press release. “We hope that the exhibition, which will be held at Hyundai Seoul, a place of trendy trends, will help lower the threshold for art collecting and broaden the base of art collectors.” 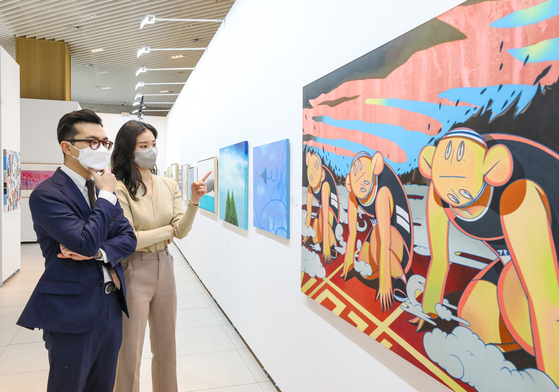 A total of 143 galleries, the highest number ever, will participate in Galleries Art Fair. They include most of the country’s major galleries, including Kukje, Hyundai, Gana Art, Hakgojae and PKM, as well as new entrants such as Kiche, Gallery Choi and Seojung Art. Unlike Kiaf, the international art fair also organized by the association and which will be held in partnership with Frieze Seoul next September, the Galleries Art Fair only presents local galleries.

The 2021 edition of Kiaf saw a record 88,723 visitors and 65.9 billion won in sales, more than double the 31 billion won sales in 2019 before the pandemic. Partly spurred on by the success of legacy art fairs, 19 new art fairs were established last year, according to a survey by the Korea Arts Management Service. Many of them have considerably lowered the thresholds for young galleries.

For example, “The Preview Hannam,” a project by Shinhan Card’s art business team that aims to connect emerging artists and galleries with newbie collectors, has become the talk of the art world. art, as it did not require the galleries to pay the initial participation fee but let them pay 20% of their sales, up to 1 million won per work sold, to the host. 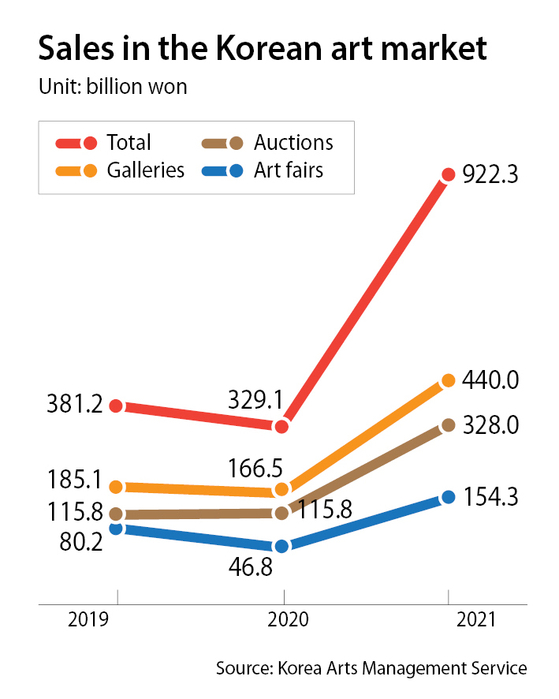 As Frieze, one of the two largest art fairs in the world, is to be held in conjunction with Kiaf, Korea’s largest art fair, in September in Seoul, the Korean art market deals are expected to exceed 1 trillion won this year for the first time.

Hwang Dal-seung, Keumsan Gallery Founder and Association Director, said, “Kiaf was once Asia’s No. 1 art fair when it started in 2002, but has now been pushed back to the 6th and 7th places. But we can be reborn as Asia’s premier art market, now that Hong Kong is facing political turmoil, Japan has high set-up costs due to possible earthquakes, and China has high prices.

The rapid expansion may have generated a bubble, but the Korean market represents only 0.02% of the gross domestic product (GDP), compared to the art markets of other industrialized countries, which represent 0.1 to 0.2% of GDP, according to market insiders. Moreover, the Korean video game market is 20 times larger than its art market in terms of sales. As a result, the art market still has great potential for growth.

The recent craze for art collecting as an investment is also contributing to the growth of the market. According to Citibank’s “The Global Art Market and Covid-19” report in December 2020, the most valuable contemporary art, between 1985 and 2020, generated an annualized return of 11.5%, outperforming most other assets. term, including developed and emerging assets. market shares. The value of art is considered less sensitive to economic indicators than stocks or bonds.

Do Hyun-soon, CEO of K Auction, said, “The enthusiasm for investing in various assets following the increase in market liquidity due to [policies to boost the economy to cope with] the Covid-19 pandemic has spread to the art market. In addition, the general public’s perception of the art collection has improved thanks to the donation of the Lee Kun-hee collection. [part of the vast art collection belonging to late Samsung Group Chairman Lee Kun-hee was donated to the nation in 2021].”

Under these conditions, the development of online markets has further lowered the threshold for art collecting, leading to an increase in the number of new participants in the art market, which are largely represented by young collectors in the twenties and thirties. According to the Art Basel and UBS Global Art Market Report 2021, online transactions accounted for 25% of the global art market last year, double the previous year. 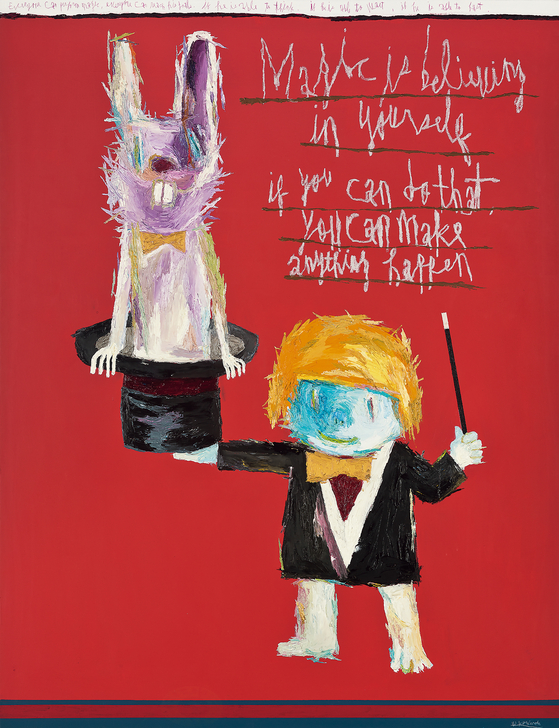 Seoul Auction said its online auction sales reached 12.9 billion won in 2021, 2.5 times more than its online sales in 2020. Among the auction house’s new online subscribers l Last year, 30-somethings made up the majority, and their numbers have grown. 130% over the previous year. The number of new subscribers in their twenties also increased by 120%. As collectors get younger, demand for works by relatively young artists such as Woo Kukwon and Moon Hyeong-tae, who are in their 40s, has increased dramatically, the auction house said. Woo and Moon are well known for their paintings of bright colors and cartoonish shapes mixed with expressionistic brushstrokes.

Kim Seo-young, head of communications for Seoul Auction, said, “While collectors from older generations mainly invest in the works of established artists whose market prices are at certain levels, collectors from so-called MZ [the millennials and Generation Z] just choose the works that are beautiful in their own eyes. As a result, the hammer will fall for such works at unexpected prices.