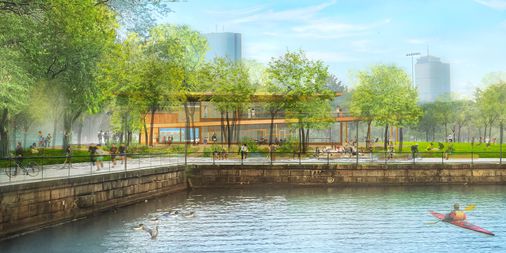 In what is billed as the largest private donation ever to a Massachusetts state park, the nonprofit Esplanade Association pledged to donate more than $ 20 million to transform a section from the park along the Charles River in Boston, near the Museum of Science.

The donation would fund $ 12 million in improvements, including a new year-round visitor center, in a two-acre area along Storrow Drive where Lee Pool once stood until the Department of Conservation and Recreation level the complex long neglected almost two years ago. The association plans to raise an additional $ 2 million for an endowment, and at least $ 6 million to cover site operations and maintenance, over the next decades.

The Esplanade association named the project Charlesbank Landing and disclosed it to donors at its annual Moondance gala, held in the park this weekend. So far, the association has raised around $ 8 million of its goal of $ 20 million.

The 10,000 square foot Charlesbank Landing pavilion would include a visitor center, the park’s first year-round public washroom, café, rooftop terrace and administrative offices. The outdoor spaces, which adjoin Teddy Ebersol’s Red Sox Fields, would include an event lawn, a nature playground, an outdoor classroom and a children’s sports field.

To achieve this, the association will need the help of the legislature: Senator Sal DiDomenico is pursuing a bill on Beacon Hill that would allow the association to lease the two acres of DCR for at least 30 years. (These invoices are needed for DCR to enter into leases of more than 10 years.) The association would not pay money directly for the lease, but the wording of the invoice requires the value of public benefits, including improvements and ongoing operating payments, exceed the fair market value of the rent. The state administration committee approved the bill last week, forwarding it to the Senate Ways and Means Committee.

The Charlesbank project originated in a public process led by DCR in 2017 to determine how to best use the Lee Pool site. However, the association started discussing with DCR how best to redo this section of the park years ago. Executive Director Michael Nichols said the two acres are at an important link near the Green Line at the eastern end of the 64-acre Esplanade Park, which stretches from the Boston University Bridge to the science Museum.

This section of the park has seen huge renovations over the past two decades, Nichols said, including the reconstruction of the Ebersol fields and the development of the Alfond Memorial Spray Deck.

“This quarter-mile stretch of the park has been completely redone for public access,” Nichols said in an email. “The old Lee Pool site served as the last piece of the puzzle.”

News consumption on social networks in 2021