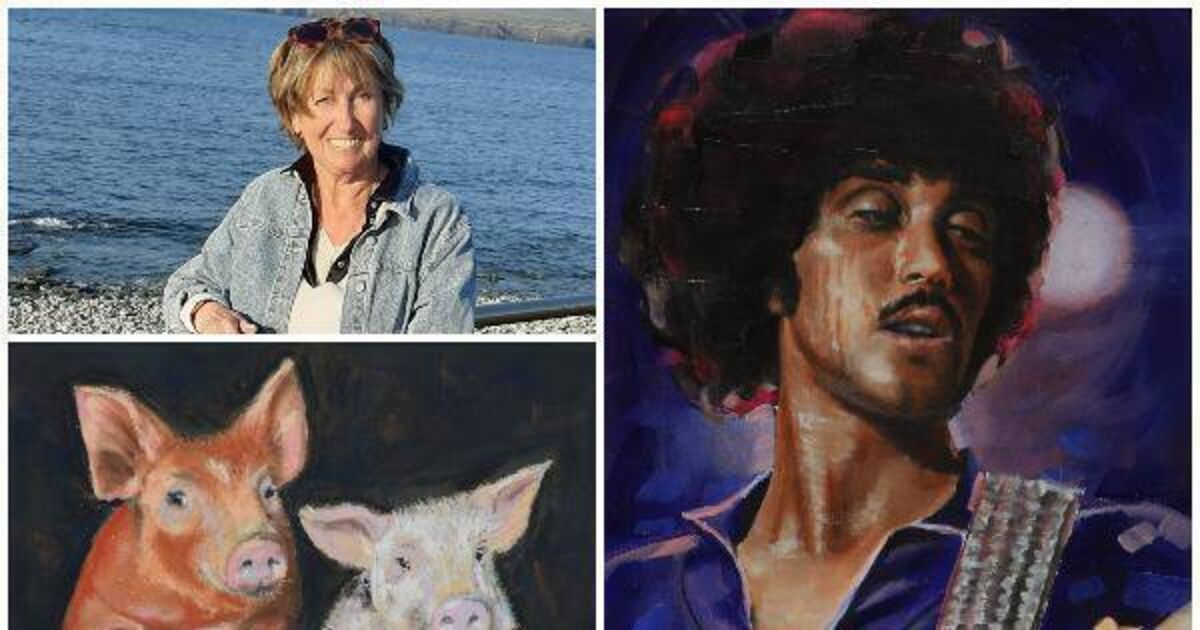 Art lovers will have ample opportunity to add to their collections when the Incognito 2022 auction opens on April 21. More than 1,200 artists contributed a total of over 3,000 works of art to the online auction, which benefits the Jack and Jill Children’s Foundation. The charity provides home nursing care and respite support for children up to the age of 6 with serious medical conditions.

The postcard-sized works from the annual sale can already be viewed online, at incognito.ie, and each is priced at just €65. The artists will not be identified until the end of the sale, but they include some of Ireland’s best-known names, such as Robert Ballagh, Maria Levinge and Martin Gale. There are also a number of famous contributors, such as Rolling Stones guitarist Ronnie Wood and Irish singers Andrea Corr, Christy Dignam and Damien Dempsey.

Incognito is now in its sixth year, and one of those who have contributed to the work almost from the start is Limerick artist Anna St George. “I first heard about Incognito when it launched in 2017,” she says. “I submitted work the following year, and have done so every year since. It’s very useful; we all produce postcard-sized paintings, and I usually submit three each year. The Jack and Jill Foundation is a great cause, and everyone is happy to support it.

St George hails from the city of Limerick and graduated from the Limerick School of Art and Design, where she was mentored by the late Jack Donovan. “I studied painting and a little sculpture. My classmates included people like Charlie Harper, Máiréad Tobin, Mick Fitzpatrick and Tom Fitzgerald. I left university for a while and then went back. Jack was the head of LSAD, and he was probably the biggest influence on me, in that he encouraged me in my early days. Henry Morgan was another local artist who encouraged me.

Later St George taught college painting for several years, and one of his pupils was John Shinnors, who is now recognized as one of Ireland’s greatest painters. “I’m good friends with John,” she said. “I see it all the time. His work has become more abstract over the years, but he does just fine.

For the past 26 years St George has lived outside Limerick in the village of Castleconnell where she runs the Penny Lane Art Studio. “It’s basically where I work and where I exhibit my paintings. I work five days a week at my own pace. It’s not a production line; if i like the work i will publish it, but only when it is ready. People often come into the gallery and order paintings. Sometimes it’s corporate clients who want work for their offices. Other times I sent orders all over the world, Germany, Dubai and the United States.

St George has had a number of solo exhibitions across the country. She also exhibits regularly in spaces such as Seán and Margaret Cannon’s Western Light Gallery on Achill Island, Co Mayo; The Whitethorn Gallery in Clifden, Co Galway; and the Kilbaha Gallery in Loop Head, Co Clare.

St George enjoys painting in oils and her favorite subject is the sea, which she often captures in its wildest form. “I also paint landscapes, and sometimes portraits. But what I love the most is painting seascapes. We spend a lot of time in Kilkee, County Clare, so most of my ideas come from there. I tend not to paint outdoors. I can take a shot and go from there when I get back to my studio, but then my imagination and my energy take over. I like to think what I paint is the feel of the sea, I would always like there to be some drama in there.

Incognito: how does it work?

The Jack and Jill Children’s Foundation provides specialist home care and end-of-life care for children up to age six. This year, as it celebrates its 25th anniversary, the charity is helping parents look after over 400 children in communities across Ireland.

Incognito was founded in 2017 and its first edition was curated by Lucinda Hart. On this occasion, and for the first three years, Incognito is a physical event, with exhibitions in Dublin and Cork. However, with the arrival of Covid-19 in 2020, the event moved online, which worked to its advantage, attracting a global audience of art lovers.

To buy works in Incognito 2022, art lovers must first register their account, which will allow them to browse the more than 3,000 pieces available in this year’s sale and add interesting works to their list. of wishes.

On April 21, each artwork will be entered into a lottery system, and one lucky individual from those who have added the artwork to their wishlist will be randomly selected to purchase it. Works not sold through the lottery system will then be available for sale individually. All orders will be packaged and shipped by registered mail within two weeks of the sale.