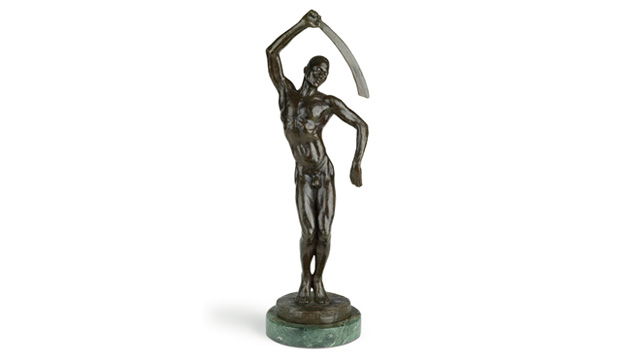 The bronze sculpture “Feral Benga” by Richmond Barthé (American, 1901-1989) exceeded all expectations, fetching $629,000 from a high estimate of $60,000. It was sold to a private collector. The work depicts Senegalese dancer François “Féral” Benga, who performed at the Folies Bergère and would become the subject of other Harlem Renaissance artists. The 19-inch tall sculpture was numbered 1 of an edition of 10 redesigned in 1986 under Barthé’s supervision. There are only two known from the original 1930s cast.

NEW YORK CITY — Swann Galleries’ 187-lot African American art sale on June 4 sold 88% amid Black Lives Matter protests that took to streets across the country. Whether the genre market is relative to the broader African-American experience in the United States is a question, but the relationship between that experience and the artwork, its artists, and its subjects is undeniable.

This was the second sale the department has held this calendar year, the first being the Johnson Publishing auction in January, which featured works from the archives of Ebony and Jet magazines. This sale of 87 lots went to the white glove. The June 4 auction brought in $3.5 million, just beating the estimate of $2.3/3.4 million.

Driven by the contemporary market for African-American artists, the secondary market is seeing a surge of these post-war and modern-era individuals. Department manager Nigel Freeman said 2018 and 2019 were record years for its sales and they show no signs of slowing down. Freeman founded the Swann Galleries department in 2006. It has become a leader in African American art auctions, driving artist records up every year and sometimes introducing artists to the secondary market.

Freeman held this sale in early spring, as the auction was originally scheduled for April. Due to restrictions in New York due to the pandemic, this sale date has been pushed back to June.

“There was no exhibit and no one was able to view the property before the sale,” Freeman said. “So basically it was sold according to the catalog – our descriptions, our condition reports and our pictures. Based on the history we have in the business and our reputation as a leader, people were on the lookout. comfortable with the way we described the lots, although we would have liked to show the work to our clients. It was great to have the kind of success we had. We saw many new clients in addition to our regular customers come back and continue to follow our sales. 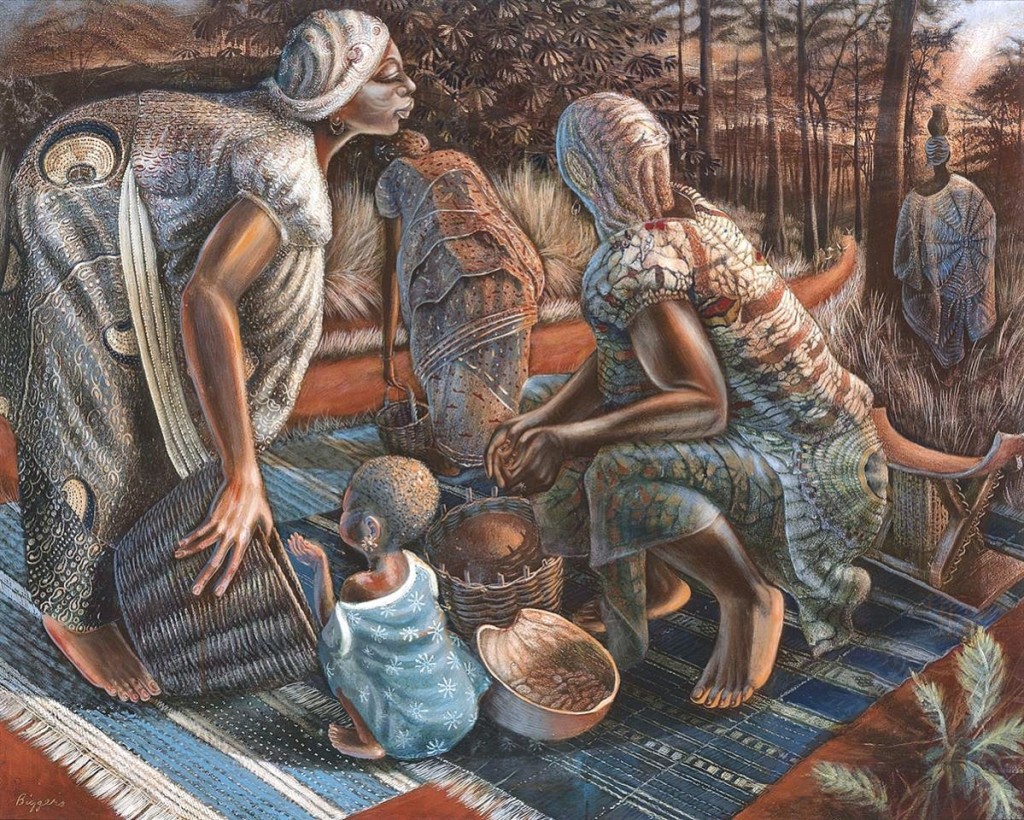 The second-highest auction result for any work by John Biggers (American, 1924-2001) sold for $269,000 for “Women, Ghana,” a 32-by-40-inch oil on Masonite board. The work was made from a series of drawings that Biggers executed on a UNESCO fellowship in 1957. The series has so far produced its most valuable works at auction.

The auction house could not have anticipated the nationwide protests that would propel African-American issues and systemic racism to the forefront of the national conversation, but Freeman said that in some cases the material offered spoke of the same concerns.

“As a department that represents beautiful African American artists, we are very sensitive to the concerns of African Americans who continue to face these issues,” he said.

Among them were an untitled paper collage and a distemper on Masonite panel by David Hammons (American, b.1943), which depicted two chained fists raised in the air. It measured 24 by 15 inches and sold for $137,000. Freeman says he believes this is Hammons’ first work ever to be auctioned, given to his college roommate on his wedding in 1966. It has remained in this collection ever since.

“That predates his first main period that people know of, his body prints, and we had some of those,” Freeman said. “They’re from the late ’60s, so it was three or four years before that when he was just starting his artistic journey.”

Hammons would also use the image of a raised fist, a civil rights icon, in later work.

Another work by Hammons tied to the moment, and indeed a long history of police oppression and brutality, was “The Man Nobody Killed”, a stencil painting and collage printed on cardboard depicting Michael Stewart, an artist who died in detention in New York. City Transit Police in 1983. All of the officers were acquitted at trial by an all-white grand jury, though the family won a $1.7 million civil suit years later. Dr. Elliot M. Gross, the chief medical examiner who orchestrated a cover-up as he released three different findings into Stewart’s death, was later fired, although he faced no further repercussions. The prosecution of this case more than 30 years ago hoped to establish a law that would require police officers to have an affirmative duty to protect prisoners in their custody from abuse. Federal and state regulations continue to not require this of police. Hammons’ work on Stewart was from an edition of 200, although each features a unique variation. It was originally featured in “Cobalt Myth Mechanics”, 1986/1987, eye magazine, #14. It sold for $22,500. The case of Michael Stewart was explored in the Solomon R. Guggenheim Museum’s 2019 exhibition, “Basquiat’s ‘Defacement:’ the Untold Story.” 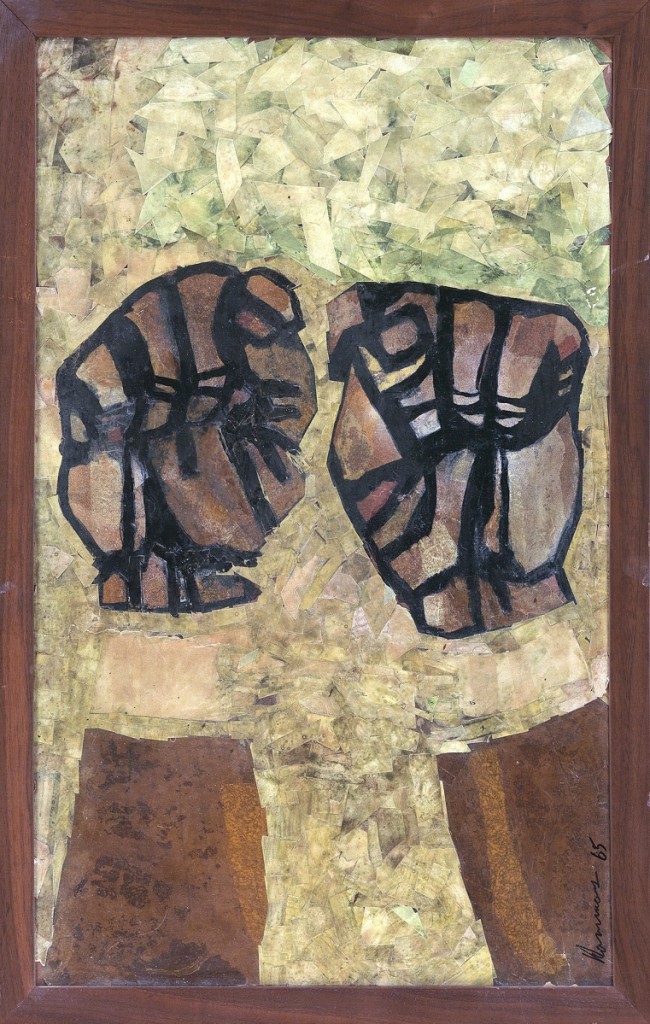 The untitled work by David Hammons (American, b.1943) featuring two chained fists raised in the air sold for $137,000. Nigel Freeman believes it to be the artist’s first work ever to be auctioned, produced in 1966 as a wedding present for the artist’s college roommate. It has remained in this collection ever since. The subject is iconic of the civil rights movement and would be a subject Hammons returned to in later work.

The sale strengthened in several places, including its flagship lot, “Feral Benga” by Richmond Barthé (American, 1901-1989), a bronze sculpture that fetched $629,000 from a high estimate of $60,000. Freeman said it was a bidding war between two determined collectors. It quickly surpassed Barthe’s previous auction record of $87,500 for a bronze at a 2017 sale at Swann Galleries.

Barthé was undoubtedly impressed by Senegalese dancer François “Féral” Benga, whom he saw perform at the Folies Bergère during his first visit to Paris just months before modeling the work in 1935. Benga would become the subject other Harlem Renaissance artists.

“It’s an iconic work, his best-known work and a work that really established him as one of the preeminent sculptors of the early 20th century,” Freeman said.

The 19 inch tall bronze is from an edition of ten recast in 1986 under the supervision of the artist. Only two are known of the original 1930s cast. It was originally exhibited in the 1937 Dance International exhibit at Rockefeller Center in New York.

The work of John Biggers (American, 1924-2001) produced strong results, including a $269,000 sale of “Women, Ghana,” a 32-by-40-inch oil on Masonite board, circa 1960. In 1957, Biggers received a UNESCO scholarship to study and record traditional African culture. He visited Ghana, Togo, Benin Republic and Nigeria with his wife for a period of six months. Along the way, he recorded what he saw in drawings in preparation for a larger body of work he would produce upon his return. Biggers’ most valuable works come from this series, including “Kumasi Market,” a work that set the artist auction record at $389,000 in Swann Galleries’ 2015 sale of Dr. Maya Angelou. 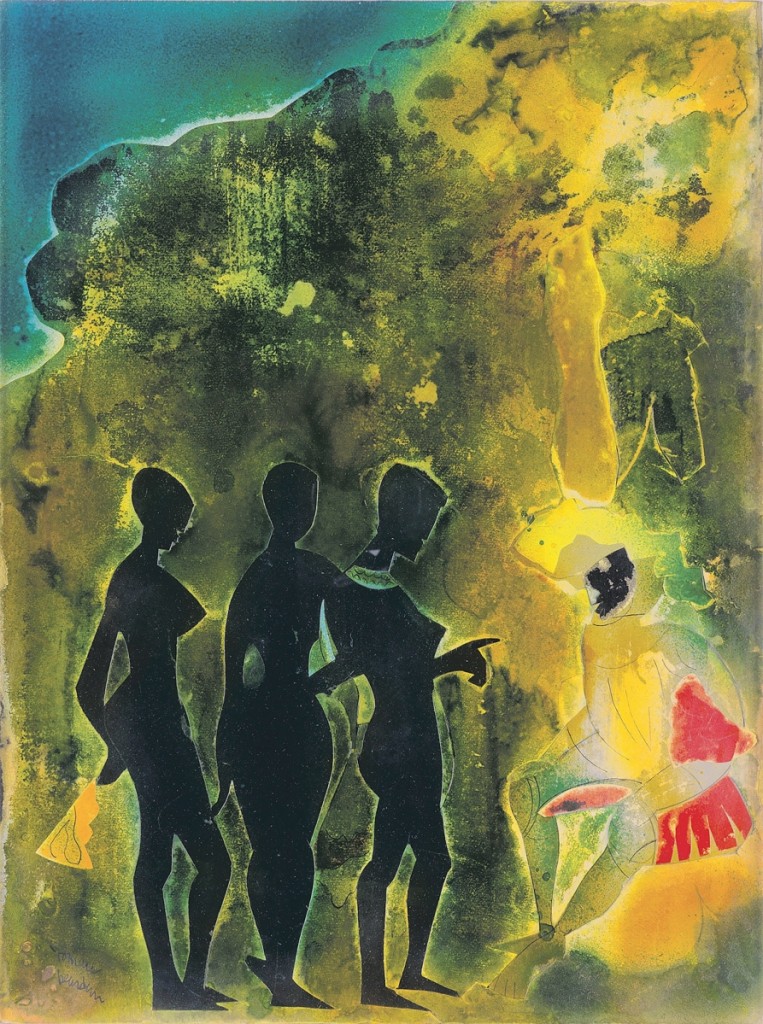 Five works by Ernie Barnes (American, 1938-2009) came from a California collection, three of which sold above the artist’s previous auction record of $47,500, set by Swann Galleries in 2017. All the works had been acquired directly from the artist. . At the top was “New Shoes”, an 18 x 24 inch acrylic on cotton canvas, circa 1970, which sold for $68,750. It was a feel-good work, featuring a man strutting down the sidewalk at full stride, exuding a sense of style and pride. “In The Beginning”, an 18 x 24 inch acrylic on cotton canvas, featured a young man shooting his basketball over a makeshift hoop in a field with a farmhouse in the distance. It sold for $57,500. Freeman wrote that it was one of Barnes’ most iconic images and was reproduced in a lithographic edition of 750 copies. It was framed with wood from a weathered picket fence, which Barnes said he did in honor of his father. The latest record was “Pool Hustlers”, a 44½ by 30 inch acrylic on cotton canvas, which sold for $55,000.

A secondary market introduction was made for photographer Latoya Ruby Frazier (American, b.1982), who was represented by two works in the sale. The two silver prints would each exceed the high estimate of $6,000, with “Gramps on His Bed” setting the bar at $10,625 and “Grandma Ruby’s Porcelain Dolls” taking $9,375.

Delaying the sale proved beneficial for Freeman as he was able to take the time and talk to customers throughout the pandemic shutdown. The catalog had been printed in late March and was in the hands of its bidders as they sat at home counting down to June 4.

Swann Galleries’ next African American art sale is scheduled for November. For more information, 212-254-4710 or www.swanngalleries.com.