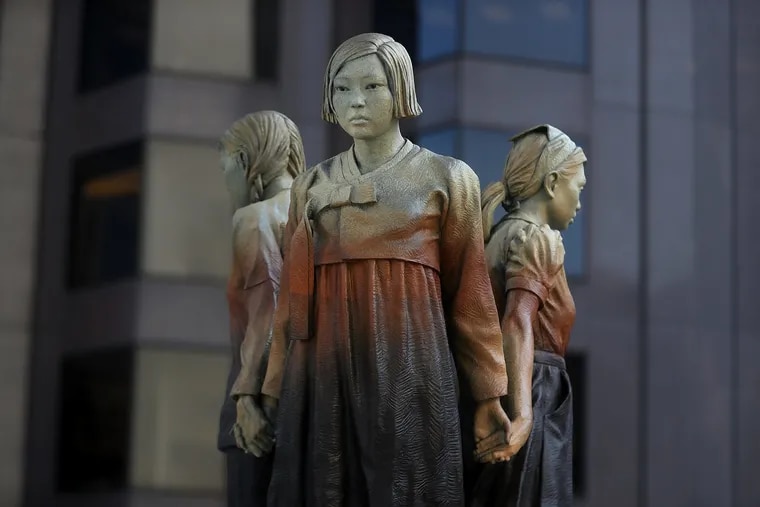 The Philadelphia Art Commission has voted to approve a bill honoring Korean so-called “comfort women” who were forced into sexual slavery by the Japanese military during World War II.

The statue is meant to draw attention to how the Imperial Japanese Army forced Korean women into brothels from the early 1930s until the end of World War II in 1945. “Comfort Women ” was the euphemism the Japanese military used to refer to women.

The Art Commission approved the statue at a meeting on Wednesday, with eight of the nine commissioners voting in favor of building it (one commissioner was not present). Commissioners approved the statue on the condition that its plaque, which specifically states that the Imperial Japanese Army victimized women, be expanded to include a more universal description. The plaque also needs to be translated into a number of as yet undetermined languages.

Commissioner Carmen Febo San Miguel suggested that the inscription still focus on the “comfort women” experience, but be changed to recognize “it’s not just an Imperial Japanese Army problem or a specific problem to Korea”.

Shinjoo Cho, chairman of the Philadelphia Peace Plaza Committee, agreed to the change at the Art Commission meeting, saying the listing would be revised to “emphasize the global nature” of wartime sexual violence.

The statue’s proposal sparked fierce debate. During a three-hour Zoom meeting on the statue last month, Patrick Dailey, an executive with the Japanese American Association of Greater Philadelphia, said building the statue here would cause the city to be “dragged into a problem. best run by the State Department, not cities.” Japanese American Association attorney Edward S. Mazurek argued that the statue is “designed to stir up anti-Japanese sentiment, hatred, and contempt for the Japanese people”.

In a September op-ed for The Inquirer, Cho wrote that the statue’s purpose is to “recognize the xenophobia and ‘otherness’ inherent in every community, so that our generations and future generations are not shaped by the same evils”.

The dispute has been going on for more than 75 years between Korea and Japan. While many “comfort women” died during the war, some survivors started talking 30 years ago. Since then, Japan has issued a series of apologies, including one in 2015 from former Prime Minister Shinzo Abe, who was assassinated earlier this year. Some international leaders have since called on Korea to officially apologize for sexual assaults during the Vietnam War, in which South Korean troops fought alongside the United States.

READ MORE: Battle for ‘Comfort Women’ statue pits two communities against each other

“Our desire is for this project to contribute and join the movement for gender and racial equity,” Cho said at a public hearing in August. “We don’t ignore victims or their voices because of our preference to avoid discomfort or have difficult conversations. We believe this space and the artwork will really help us get there together.

Once built, the statue will be a replica of the first “comfort women” statue erected in 2011 in Seoul in front of the Japanese Embassy. Since then, 17 of the statues have been built around the world, including six in the United States.