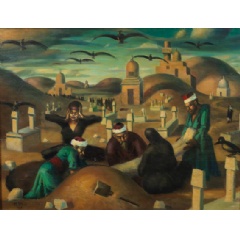 Modern and contemporary art from the Middle East, including the banks of the Nile

A journey through Egyptian art

An exceptional oil painting by an Egyptian artist Mahmoud Said (Egypt, 1897-1964)described as “one of his most striking paintings” by the artists’ catalog raisoné, will lead the Modern and contemporary art from the Middle East sale. Estimated between £350,000 and £500,000, The Entombment marks a turning point in the development of what is now recognized as Said’s signature style. It has never been auctioned before and represents one of the few instances where a narrative scene has entered the market.

Noor Soussi, sales manager, comments “The painting is particularly fascinating, because it shows how Saïd began to take risks, finding his identity as an artist. He grew tired of the stilted conventions of academic portraiture and landscapes and sought to capture more intimate scenes of daily Egyptian life. His first work with a religious subject, it signals Saïd’s gaze moving towards his immediate environment, his homeland. It contributes to a solid history of Egyptian funerary art, but the specific choice of an entombment refers to the death of Christ, central to a Western canon populated by early Flemish painters and Tintoretto. By appropriating this narrative, he elevates the fate of ordinary civilians to that of saints and heroics.

The EntombmentIts importance is indicated in its provenance. It belonged to the artist’s daughter and was exhibited twice in major retrospectives while on loan to the Alexandria Museum of Fine Arts.

• Gaza by Omar El Nagdi (Egypt, 1931-2019). Another striking lot is Gaza, a nine-meter quadtych, Omar El Nagdi’s commemoration of the 2009 Gaza war. This clash between the Israel Defense Forces and Palestinian paramilitary groups in the Gaza Strip ended by heavy losses on the Palestinian side, a tragedy that prompted the Egyptian artist to give a visual language to the Palestinian persecution and the brutalities imposed by their oppressors. The characters are distorted and splintered, separated from their humanity as pain permeates their faces. Nagdi’s embrace of art as a medium for activism, his rendering of the trauma of war, follows the lead of 20th-century masters Goya and Picasso. Estimate £250,000 – £450,000.

• Crusader B by Mohamed Melehi (Morocco, 1936-2020). The monumental diptych of Mohamed Melehi Crusader B, already presented at the artist’s historic exhibition at the Bronx Museum in 1984, is equally revolutionary. With her mesmerizing wave canvases, Melehi fused Western abstraction with the decorative patterns and schemes that emerged from African and Eastern cultures, demonstrating how the latter predates the former. Estimate £80,000 – £120,000.

This topical content was set up by WebWire’s editorial staff. Linking is allowed.