Gallery owner Johann König: “The art market is progressive in its content, but conservative in its performance” 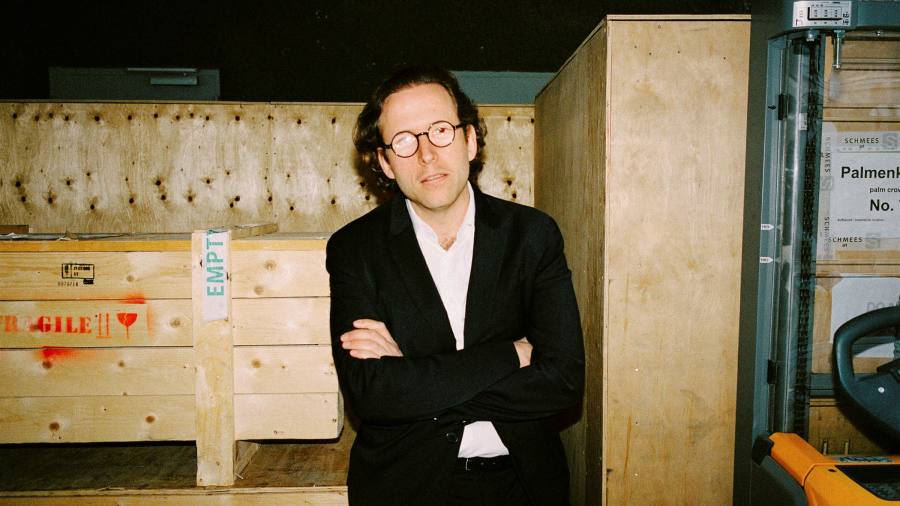 Gallery owner Johann König: “The art market is progressive in its content, but conservative in its performance”

In 2002, Johann König’s money was running out. The German gallery owner had spent an inheritance from his grandmother and a loan of €25,000 from his uncle for the rent and the management of his space. After a series of financially unsuccessful exhibitions, it was preparing to close within a year of opening. “Then Jeppe Hein had this great idea for a sculpture, but it was kind of a crazy project,” says König.

Despite the prospect of going into debt, the gallery owner commissioned the Danish artist’s piece – a large steel ball with a motion sensor that rolled as visitors approached, gradually destroying the walls of the Berlin space of Konig. Buyers, including the Museum of Contemporary Art in Los Angeles, picked up all three editions. “It was a very important moment,” says König. “It was the first thing I really wanted to do that turned out to be financially successful. It gave me the confidence to do things that I think were unusual and to trust my own instincts.

This kind of risk-taking has defined König’s approach for the past two decades. At 40 he became an influential gallerist, representing Katharina Grosse, Elmgreen & Dragset and Turner Prize winner Helen Marten, renowned for presenting bold contemporary art in unconventional settings. When we speak via video call ahead of his gallery’s appearance at Art Basel next week, I can see the austere ceiling of his Berlin gallery, housed in a 1960s brutalist church. Bright red abstract paintings by Chiharu Shiota beam against gray concrete walls.

König grew up immersed in art. His mother, an actress and illustrator, and his father, an art teacher and then director of the Ludwig Museum in Cologne, welcomed such luminaries as Franz West, Andy Warhol, Claes Oldenburg, David Hockney and Rosemarie Trockel to their family home in the years 1980. Gerhard Richter was a witness at his parents’ wedding. Nam June Paik became his godfather after a “Fluxus baptism”.

“Everything we did was related to art. For the holidays, we went to Ireland to live with Isa Genzken or to northern New York with Bill Copley,” says König. But he also describes how this upbringing led to an early antipathy to the art world: “I felt like I was competing with art for my parents’ attention.

His attitude changed after an accident at the age of 11 left him partially blind. In his 2019 memoir, The blind gallery owner, published in English next November, König describes how attending a boarding school for visually impaired children was key to shaping his understanding of contemporary art. It was there that a dedicated art teacher taught him to approach art on a more philosophical level through the conceptual works of Marcel Duchamp and Joseph Beuys. “For me, it opened my eyes because I suddenly started to understand the relevance of art and all these characters from my family background,” says König.

After a few years at the center of the Frankfurt art scene, König moved to Berlin and opened his own gallery at the age of 21. Since then, König Galerie has grown into a major international presence with spaces in London, Vienna and, as of last year, Seoul.

König describes his gallery – which represents a roster of 40 emerging and established artists – as “an old-fashioned boutique gallery with innovative features”. He is best known for helping to launch the careers of young artists, such as Polish sculptor Alicja Kwade, who began collaborating with him a few years after they met at his graduation exhibition in 2004. At Art Basel, König will present eight works by the artist. — a series of stone globes balanced on or precariously positioned under cast bronze chairs — as a public installation in the city center as part of the Parcours section of the fair.

Such ambitious presentations are typical of the gallerist, for whom developing an artist’s career means offering them unique contexts in which to exhibit their work. That’s why in 2015 he moved his Berlin flagship to St Agnes, a desecrated, almost windowless church in the Kreuzberg district.

“About 10 years ago, I came to a crucial point where I asked myself, what is a gallery for today? I said to myself either stop maintaining a space and just work as an agent, or find something that really makes sense for an artist’s practice and create exhibitions that have an impact. I looked for special real estate: metro stops, water towers, churches and bunkers. And then I found this brutalist church.

St Agnes has since become one of the city’s top art destinations, not only because of its remarkable architecture, but also thanks to König’s efforts to attract as wide an audience as possible. For example, last winter schoolchildren, tourists and serious collectors lined up to see monumental AI works by Refik Anadol alongside modestly sized figurative paintings by Johanna Dumet.

“We try to build programming that highlights artists who are very relevant in their respective disciplines,” he says. “We try to show, say, the most important digital artist. It is important that they are innovative and contribute to the conversation. »

A dynamic and varied program is part of König’s mission to create a more accessible “open door” atmosphere in its galleries. “I think most people in the art world are unaware of the number of anxiety-inducing barriers that keep people from entering a gallery,” he says. “And I think, especially today, with Web3 and the metaverse, the physical experience of exhibits is very important.”

Although König champions physical events, he also embraces digital opportunities. In addition to hosting virtual exhibitions at Decentraland and regularly hosting NFT drops on his gallery’s website, last year he launched a digital business called Misa.art, an online buying and selling platform. line which aims, in his own words, to make the “art market more accessible and understandable for both collectors and artists”. Artists can apply to sell their work, while the platform attracts collectors by offering greater price transparency, evaluating artists based on their exhibition history and allowing people to buy fractions of works of art.

This multi-faceted approach is in line with what König sees as the evolution of gallery function: “When I started, it was really about providing market access. Now, I think the business proposition to artists needs to be much broader.

After hosting its own in-house art fair, launching an app, and opening an Asian outpost over the past two years, König has certainly wasted no time expanding its own business proposition. But there is still room for more. “The art market is extremely progressive in its content, but very conservative in its performance. Corona has opened up the possibility of doubting the rules a bit.