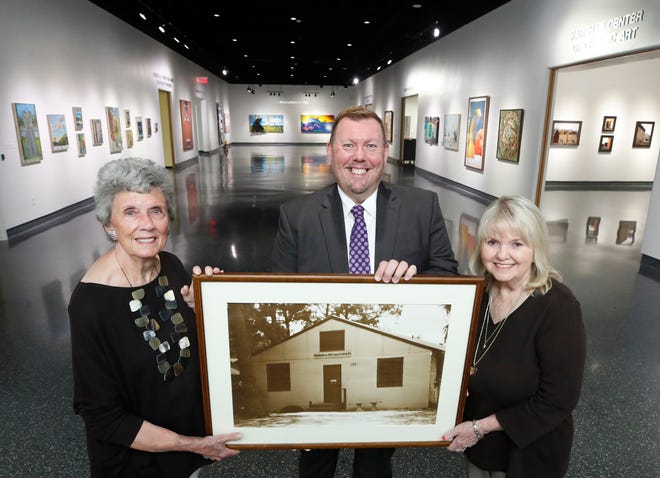 DAYTONA BEACH – Andrew Sandall, who has overseen a series of construction and expansion projects at the Museum of Arts and Science since taking office as executive director in 2012, has announced he is leaving Florida for a new post.

Sandall will move in early January to take on the role of President and CEO of the Morris Museum in Morristown, New Jersey, the second largest museum in that state and its only Smithsonian affiliate.

“I am immensely proud of what we have accomplished in my almost 10 years here at MOAS,” said Sandall. “It’s something to think about how the museum has changed, both physically and programmatically.”

Sandall led the museum through a chain of major projects that began with the construction of the Cici & Hyatt Brown Art Museum located at the eastern end of the museum’s sprawling property. Sandall called the art museum “magnificent” and said he “defined the early years of my stay here”.

“It’s wonderful to look at the museum as it is today and to see it so vibrant and vibrant, with programs and events that the local community seems to really enjoy, and the most amazing team at staff, administrators and volunteers who come to amaze me with their endless passion and creativity, and by whom I know I will be greatly missed, ”he said.

The Board of Trustees of the Museum of Arts and Science is already working on a transition plan that will involve the appointment of an interim director before embarking on a nationwide search for Sandall’s successor. It is hoped that the new director will be on board by summer 2022.

Sandall will remain at MOAS until the end of this year to assist with the leadership transition and help prepare the museum for its impending re-accreditation by the American Alliance of Museums in 2022.

Discover the history of the Daytona Museum:Daytona Beach Arts and Science Museum celebrates 50 years in location on Nova Road

Sandall was appointed executive director of the nearly 75-year-old Daytona Beach Museum in May 2012. He came to MOAS, one of Florida’s largest museums, after working for several years in Orlando.

Construction of the new art museum was first announced publicly on the third day of Sandall at MOAS. He immediately embarked on overseeing the design, construction and operating plan of the Cici & Hyatt Brown Museum of Art, which opened to the public in February 2015.

Overseeing construction projects and raising large sums of money defined Sandall’s time at the museum, which now has an annual budget of $ 3 million.

The museum has more than $ 51 million in endowments, making it the second-largest number of endowments in Florida. Only a $ 110 million Winter Park museum has raised more money for its future.

The considerable endowment and new development of the Museum of Arts and Science is in large part due to generous donors such as Cici and Hyatt Brown, Nancy and Lowell Lohman, the Root family, and local businessman and philanthropist L. Gale Lemerand.

During Sandall’s shift, the museum tackled the overhaul and reconstruction of the flood-damaged Lemerand Wing, formerly known as the West Wing.

He also oversaw the construction of the Lohman Planetarium and the new Main Entrance Hall as well as the upgrade and redisplay of the Root Family Wing. The Root Wing project included the enclosure and the addition of climate control to the station, allowing the museum’s collections to be on display alongside real passenger carriers.

In addition to leading the construction projects, Sandall was also responsible for modernizing the museum’s programming and exhibits to bring them into the 21st century.

He was also tasked with reshaping and rebuilding the MOAS staff to better meet the needs of the museum and increase its role as part of the local social scene. This involved organizing educational events and programs and launching programs more aimed at adults, such as the weekly yoga classes in the gallery at the Cici & Hyatt Brown Museum of Art and the quarterly wine tastings.

Efforts have also been made to develop iconic events such as the annual Smithsonian Jazz Masterworks Orchestra concerts and consolidate the Asbury Short Film Concerts as an annual meeting place in the community.

“The Board of Trustees is grateful for Andrew Sandall’s work at the museum and all that has been accomplished over the past nine years with Andrew and our excellent staff and volunteers,” said Katherine Miller, Chair of the Board of administration of the MOAS. “Andrew will be sorely missed, but we know he will be very successful in his new museum. We look forward to building on the solid foundation of MOAS and are excited about what the future holds. “

Learn more about the Daytona Museum

MOAS is a non-profit organization founded in 1955 and accredited by the State of Florida in 1962. The museum is accredited by the American Alliance of Museums and is affiliated with the Smithsonian Institution. The programs are sponsored in part by the State Cultural Affairs Division and the Volusia County Government.

In July, the museum celebrated 50 years of activity at its Nova Road location.

A few years after the end of World War II, three local women opened a children’s library in a vacant military barracks building that stood on what is now the eastern edge of the Daytona State College campus. The library in the small White Street building became a children’s museum, and later became the birthplace of the Museum of Arts and Sciences.

Located in a 90-acre Florida nature reserve, the 100,000-square-foot MOAS building houses more than 30,000 objects, including those from the Dow Gallery of American Art, one of South America’s finest collections of American art. East ; the Schulte Gallery of Chinese Art; and the Bouchelle Collection and Galerie des Arts Décoratifs, the largest and most comprehensive collection in the South.

MOAS also houses the Gillespy gallery of artefacts from sub-Saharan Africa; the Cuban Foundation Museum presenting one of the most important collections of Cuban paintings in the United States; the Prehistory of Florida gallery with the skeleton of the giant sloth; and the Root Family Museum featuring restored railroad cars, vintage automobiles and the largest collection of Coca-Cola memorabilia in Florida.