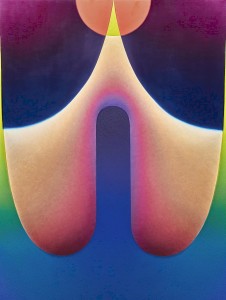 Easily surpassing its estimate of $400/600,000, “Point of Entry (Blood-Orange Moon Over Orange Sac)” by Loie Hollowell (American), a 2017 multimedia work that garnered worldwide attention but sold at a new US client for Clars for $1,050,000. It was the first time that one of Hollowell’s works has fetched so much money at a sale in the United States and is also the first work sold by the auction house to fetch more than a million. of dollars.

OAKLAND, CA. – On Friday, March 25, the Clars Auction Gallery set a new record for Loie Hollowell (American, b. 1983), when “Point of Entry (Blood-Orange Moon Over Orange Sac)”, a mixed media work measuring 48 inches on 36 $1,050,000 from a buyer in the United States who was a new client for Clars. The price was not only the artist’s highest price achieved in a sale in the United States (the current overall record for Hollowell stands at $2,126,095 for “Linked Lingams [yellow, green, blue, purple, pink]’, taking place in June 2021 in Hong Kong), but it was the first batch of Clars’ 50-year history that exceeded the million dollar mark. It was by far the best lot of 1,579 lots of modern and contemporary art, design, furniture, decorative art and Asian art, art and jewelry offered from March 25-27; the three-day tally of sales was around $3 million, a total that ranks among the top three in company history and the highest sale since the company changed hands in 2019 .

Rick Unruh, Managing Director and Director of Fine Art at Clars, said: “Clars has shown the global art world that when you have an exceptional, contemporary piece, like our Loie Hollowell, they (the bidders) will come – and they did. We pulled out all the stops with marketing, even marketed it in Asian newspapers to reach the Hong Kong market. We had interested customers from all over the world. Many bidders were new for Clarks.

The second highest price in the sale at $150,000 was a rare drawing by Pablo Picasso (Spanish, 1881-1973) titled “Etudes VII (after Manet)” from 1961. Well documented in the catalog raisonné of the artist, the lot had several international bidders but ultimately sold to a buyer in San Francisco. Rounding out the top three at $106,250 was the two-sided oil on canvas titled “Fishing Town with Women on Beach/Seascape with Trees” by Maria-Mela Muter (French Polish, 1876-1967). It received serious international attention, including from Poland and Israel, and was sold to a buyer in Poland. 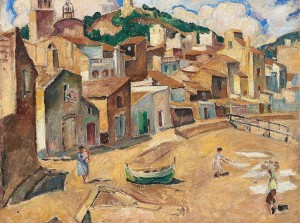 “Works by female artists are doing much better,” said Rick Unruh. “Fishing Town with Women on Beach” and “Seascape with Trees”, a double-sided oil on canvas by Maria-Mela Muter realized $106,250 from a buyer in Poland ($50/70,000).

Works by iconic artists such as Roy Lichtenstein, David Hockney, Wayne Thiebaud, Salvador Dali, Sol Lewitt and Richard Diebenkorn dotted the sale and brought strong results as well. Roy Lichtenstein’s 1965 “Shipboard Girl” offset lithograph, which fetched $53,125, is an improvement on the $20,000 hammer price paid by the Napa Valley, Calif. seller when he sold it. acquired from Clars in 2013. The Litchtenstein seller also sold a portfolio of 39 prints – etchings, aquatints, drypoints and soft varnish etchings – by British artist David Hockney (b. 1937), who almost doubled its low estimate to close at $34,925. “Six Fairy Tales from the Brothers Grimm” was acquired at Sotheby’s New York in 2011 for $8,125.

Cristina Campion, associate director of 20th century design at Clars, was delighted with the international response to the works of American master carpenters, such as George Nakashima and Vladimir Kagan. A 1971 Nakashima wall cabinet that retained its original George Nakashima studio work card peaked at $62,500, more than double its high estimate, and sold to an international buyer bidding over the phone. A circa 1999 Vladimir Kagan collection contour rocking chair came from Dennis Miller Associates of New York and found a new home with an online bidder for $16,900, more than three times its high estimate.

Another favorite among bidders was Danish designer Hans Wegner, who was represented in the sale with six lots. Topping the $17,500 bunch was a Valet Chair, followed by a Papa Bear Lounger which fetched $13,700.

The Clars Auction Gallery will sell Asian art, jewelry, furniture, decorative art and fine art on April 24, and jewelry and watches on May 5.

Prices shown include the buyer’s premium as reported by the auction house. For information, www.clars.com or 510-422-0940.